Ocean’s movies are a Steven Soderbergh’s masterful remake of a 1960 heist movie, and they did some insane numbers, mostly because of the presence of some of the brightest of Hollywood like George Clooney, Brad Pitt, Andy Garcia, Matt Damon and Julia Roberts. Soderbergh updated the original premise from the 1960 film and upgraded it to the 21-century technological realities. 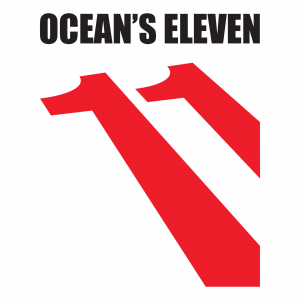 In this movie, the main character, Daniel Ocean, wants to orchestrate the biggest heist in history. Daniel has come up with a mastermind plan to rob three major casinos in Las Vegas; the MGM Grand, the Mirage, and the Bellagio (they would have probably wanted to rob the Genting Casino as well, but it’s moving its business primarily online), but it’s not going to be an easy task as the casinos belong to the ruthless corporate shark, Terry Benedict (played by Andy Garcia). In the casinos, Picassos look down contemptuously on the gamblers as Terry keeps all his money from the MGM and the Mirage in his extremely well-guarded vaults.

One of the astonishing things is that the moviemakers used the actual casino as their target (the Bellagio) instead of devising a fictional one which could get some wrong ideas to the certain audience members. Soderbergh did an exceptional job of showing the Vegas setting, taking us directly into the heart of casino operators.

This kind of film usually stands or falls by the charisma of its superstars; luckily, the actors pulled out a magnificent job. Overall, it’s an incredibly cool, fresh-faced and slick movie. The plot is delivered in a fluid and comprehensible way, and the story is complex, intelligent, and funny for the most part.

After pulling one of the biggest heists of all time, the crow has another job to complete. The Ocean’s Eleven crew thought that they would be able to enjoy their money in peace, but Terry is still furious about losing his money and wants it back. The team has an ultimatum to perform another job and get all the money back or to risk being thrown in jail. How are they going to pull it off? By carrying off another genius plan.

Overall, the movie shows some great acting, beautiful European surroundings, satisfying camera work and a bit slower plot. The pace of the movie was a bit uneven and the characters drifted from the story. All in all, a slight disappointment after the first movie.

After paying back unforgiving casino mogul Terry Benedict millions of dollars they stole for him, the time has come to perform a more personal job. After Willy Bank, a heartless casino shark double-crosses Reuben Tishkoff, one of the members of the original Ocean’s Eleven, Danny Ocean decides to do what’s necessary to bring Willy Bank down. Unfortunately, it includes seeking for help from one of their biggest enemies, Terry Benedict.

This movie is definitely better than Ocean’s Twelve, with Al Pacino being the legend he is, bringing that extra bit to the movie. The story is at par with the first movie, and acting is fabulous. It is definitely a movie worth watching.